Welcome to the Choices WordPress Theme - a theme that allows you to build unique skins in no time... x

You are here: Home » Products 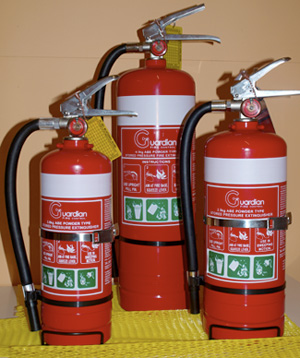 There are two main types of fire extinguishers, stored pressure and cartridge operated. In stored pressure units, the expellant is stored in the same chamber as the fire fighting agent. Cartridge operated fire extinguishers contain the expellant gas in a separate cartridge that is punctured prior to discharge, exposing the propellant to the extinguishing agent. Depending on the agent used, different propellants are used.

All fire extinguishers are subject to bi-annual and annual inspections in accordance with AS1851-2005. 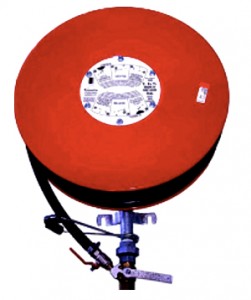 A fire hose is a high pressure hose used to carry water or other fire retardants, such as foam, to a fire to extinguish it. It is designed to be used as a quick response method for fighting fires in their early stages. Fire Hose Reels are suitable for Class A fires.

Class A fire consists of burning paper, textiles, wood, most plastics and rubber.

Fire Hose Reels are installed to provide an easily accessible and constantly controlled supply of water for fire fighting purposes. Fire Hose Reels are permanently connected to the water supply and consist of a main turn on/off valve, a hose guide, a thirty six [36] meter length of non kinking hose 19mm in diameter and a nozzle.

Fire Hose Reels are subject to bi-annual and annual inspection and testing in accordance with AS1851-2005. 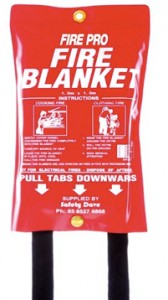 A fire blanket is a safety device designed to extinguisher small fires. Fire blankets are manufactured from fire-resistant fabric, usually fiberglass, which is placed over a fire in order to smother it by reducing the oxygen supply to the fire. In order for a fire to burn, heat, fuel and oxygen need to be present. A fire blanket either completely surrounds a burning object or is placed over a burning object and seals off the supply of oxygen

Fire Blankets are most commonly used on cooking oil and fat fires.

Once used, a fire blanket should be replaced as they can be contaminated with residue from the fire which could re-ignite if used again.

Fire Blankets are subject to bi-annual and annual inspections in accordance with AS1851-2005.

Fire hydrants are active fire protection measure as a source of water in most rural, suburban and urban areas with a municipal water service allowing access by fire fighters.

A hose is attached to the fire hydrant, and then the valve is opened to provide a powerful flow of water. The hose can be further attached to a fire engine which can then use a powerful pump to boost the water pressure and split it into multiple streams. The hose may be connected with a threaded connection, instantaneous “quick” connector or a Storz connector. The water inside a charged hose line causes it to be very heavy and high water pressure causes it to be stiff and unable to make a tight turn while pressurized. When a fire hydrant is unobstructed, this is not a problem, as there is enough room to adequately position the hose.

Most fire hydrant valves are not designed to throttle the water flow; they are designed to be operated full-on or full-off. The valve arrangement of most dry-barrel hydrants is for the drain valve to be open at anything other than full operation. Usage at partial-opening can consequently result in considerable flow directly into the soil surrounding the hydrant, which, over time, can cause severe scouring. A hose with a closed nozzle valve, or fire truck connection, or closed gate valve is always attached to the hydrant before opening the hydrant’s main valve.

When operating a fire hydrant, appropriate personal protective equipment such as a helmet with face shield, are typically worn. High-pressure water coursing through a potentially aging and corroding hydrant could cause a failure, injuring the firefighter operating the hydrant or bystanders.

Since fire hydrants are one of the most accessible parts of a water distribution system, they are often used for attaching pressure gauges.

Fire Hydrants are subject to bi-annual and annual inspections, annual flow testing and five [5] yearly hydrostatic pressure testing in accordance with AS1851-2005. 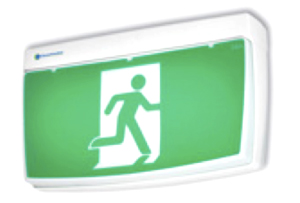 An emergency exit in a structure is a special exit for use in emergencies such as a fire. The combined use of regular and special exits allows for safer evacuation, while also providing an alternative if the route to the regular exit is obstructed by fire.

Emergency fire exits are strategically located in a building and lead to outward opening doors with exit lighting indicating their location.

When properly maintained, Emergency and Exit lights have a life cycle of approximately seven (7) years with an expected failure rate of around 15 percent per year. Most emergency and exit lights fail due to faulty power converter (PC) boards and/or batteries, and generally will require replacement

It is critical for building occupant safety that emergency and exit lighting is tested and that remedial work is carried out to ensure that the lighting remains functional.

Emergency and Exit lighting is subject to bi-annual and annual testing in accordance with AS2293.2.

Fire Extinguishers that have been stored in non-aggressive environments can continue to be utilized for long periods of time providing they are properly maintained and the structural integrity of the cylinder has not been compromised through damage or rust.

As part of our environmental policy, Guardian Fire Control re-instates structurally sound fire extinguishers that would otherwise be discarded and disposed of at refuse stations. The cylinders are pressure tested at our own facility, fully serviced. New labels and new pictorials are attached if needed. The extinguishers are then tagged in accordance with current regulations and these cylinders are put back into service.

We offer these reconditioned cylinders for sale at discounted prices, making them a much more affordable option for clients when price of new equipment is a deterrent or for those clients who choose ecological option.

These reconditioned extinguishers are fully compliant with AS1851-2005 and come with a two year warranty.

We have many resources which you can use in your workplace. View them here >